What is Psy-Trance? Celebrating 10 years of Psy-Trance with Psibindi

Psy-Trance, originally named Goa Trance from its geographical origins in the 1960’s, is a sub-genre of Trance Music and wider EDM (Electronic Dance Music). With a BPM range of 138+, Psy-Trance is a fast paced and driving form of dance music combining high energy beats with technical elements. 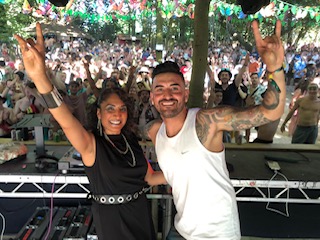 Trance music is known for its repetitive melodies and consistent beat, which creates a ‘hypnotic’ response in its listeners. The genre also has been shown to have positive effects on mental health and wellbeing. ‘A recent study conducted by Frontiers in Psychology found that the harmonic repetition and the complex harmonic structure of trance music are uplifting. The various breakdowns and buildups built within its structure are crucial to the listener’s perception and responses.’ https://edmworldmagazine.com/trance-music-and-mental-health/

Due to the sub-genre’s origin association with hippy culture in the 1960’s, large outdoor venues are popular venues for live performances of Psy-Trance music. This has contributed to the genre increasing popularity and subsequent move further towards the mainstream in recent years. This has been particularly driven by largely attended festivals such as Boomtown and Boom. However, the genre still maintains its roots in counterculture and characteristics of diverse transnationalism.

There are many notable labels and artists (Astrix, Infected Mushroom) within the Psy-Trance genre. We spoke to Rena Biring aka Psibindi founder of  Psy-Sisters ‘a global arts collective and record label providing an online platform to promote and support female* electronic music artists.’

“Psy-Sisters has reached a milestone 10 year anniversary this year. I am immensely proud that we have featured hundreds of artists on our global platform and on our line ups over the past decade. Whilst collectives like Psy-Sisters have been integral in amplifying fairer representation of female, trans and non-binary DJs on line ups, the recently published Jaguar Foundation report highlights that there is still much more effort needed by the electronic dance community to balance gender equality. Psy-Sisters remains committed to this movement for change.

Psy-Trance doesn’t fully get the recognition that it deserves from our mainstream dance counterparts; possibly because psychedelic culture isn’t so understood. However, thanks to support from A-List DJs such as Nina Kraviz and DJ Jaguar who are both fans of Psy-Trance, and have played my music, I remain optimistic that Psy-Trance will find it’s place.”

The label’s latest three Psy-Trance singles ‘Atmospheric Pressure’ by Coral, ‘Greater Intelligence’ by Future Species and ‘Love Around Us’ by Shinouda all feature on our latest HotHouse Music  playlist on our Spotify series. Listen to the playlist here.

HotHouse composer Elena Alekseeva is also part of the Psy-Sisters network. Elena is a film and games composer specialising in augmented environments. As a pianist and music producer, Elena works across various musical styles and genres from classical music to electronic music. Sincere thanks to the Psy-Sisters network network for introducing us.

After two decades in the music industry, Lynden has established herself as a music futurist ready to embrace complex and strategic licensing problems. Continue Reading...
Call
Contact